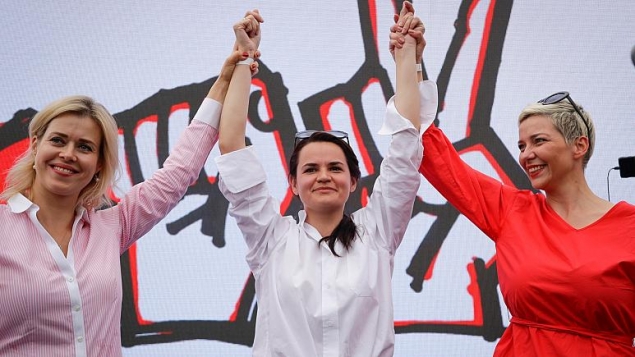 These are the women joining forces to face Belarus' long-time leader Alexander Lukashenko in the upcoming August 9 presidential election.

The trio have become the main symbol of the opposition, going up against Lukashenko, who has been in power for 26 years and has been dubbed Europe's last dictator.


Svetlana Tikhanovskaya (pictured, centre) is the wife of well-known blogger Sergei Tikhanovsky, who has been unable to run in the election after being detained in May on charges of attacking a police officer.

Svetlana is running in his place.

"Seryozha, I love you very much," said the 37-year-old while standing outside Belarus' Central Election Commission (CEC), after receiving a certificate of registration as a presidential candidate. "I am doing this only for you and the people who followed you and believed in you."

Tikhanovskaya joined forces with the campaigns of two other candidates who have both been barred from taking part in the election.

Veronika Tsepkalo is the wife of Valery Tsepkalo, who fled Belarus for Moscow out of fear of being arrested after being ousted from the election. Maria Kolesnikova is involved with the campaign of Viktor Babariko, who was stopped from registering after being arrested on charges of bribery.