OPINIONSvetlana Tikhanovskaya: The regime in Belarus is trying to steal our victory. It won’t succeed 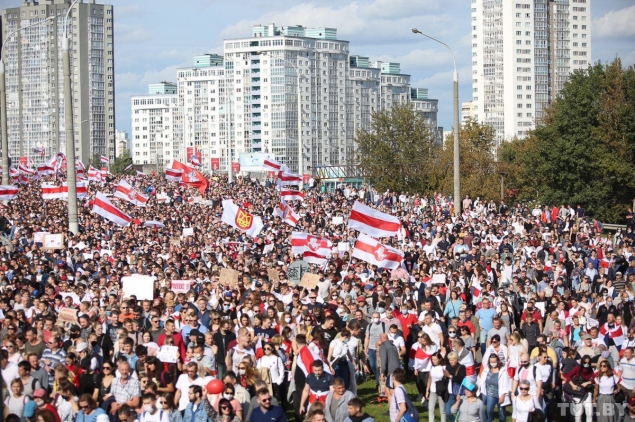 Svetlana Tikhanovskaya is the leader of the opposition in Belarus, currently exiled in Lithuania.

Belarusians are coming together in an unprecedented mass movement for democracy. The harder that dictator Alexander Lukashenko tries to maintain his power, the more it is ebbing away.


As the candidate of the opposition movement, I won the majority of the votes in the Aug. 9 presidential election — based on detailed analysis of the election results by several independent groups, which managed to scrutinize voting records in a large number of precincts despite massive government fraud. Since then he has deployed security forces against peaceful demonstrators and tried to blanket the country — assisted by Russian-supplied journalists — with lies and propaganda.

Yet the people continue to assert their right to self-government. They are not only marching in astonishing numbers but also striking in factories, sharing information, and working to help and support each other in countless ways. We insist on peaceful protest, and we refuse to engage in violence.

Many people ask if that will be enough. I believe the answer is yes. We as a nation have passed the point of no return. Lukashenko has no future as a leader of this country, and it is only a question of time until he leaves power.

But, for now, we must continue with our efforts. And we know, from experience, exactly what we have to do.

First, we will continue with our mass demonstrations. Weekly Sunday marches of hundreds of thousands have become the norm. State propaganda claims that they are shrinking — but everyone in Belarus can see with their own eyes that the marches are getting bigger every week. They will continue.

Thousands of workers in state-owned factories — the backbone of state financial income and propaganda about the stability of the regime — are already on strike. We will support them. Support networks and online funding campaigns are providing financial assistance to the workers to help them overcome the shock of leaving work.

With time, the strikes are spreading from factories and state-owned firms to the civil service itself. Academics, teachers and some public servants are already on strike. Students are marching and protesting, too.

Second, we will continue our boycott of the state apparatus. Many private businesses have stopped dealing with state-owned banks; more will do the same. Whenever possible, businesspeople should delay or refuse to pay and refuse to buy products from state-owned factories.

Third, we will continue with our current information policy. We have made wide use of social networks, especially those that can’t be blocked or accessed by the state. Access to information is the strongest weapon we have. Sharing and disseminating the truth are civic duties at a time when government-run TV uses contractors from abroad to spread lies.

We will continue to enforce a complete blockade of state-owned media — no subscriptions, no circulation, no dissemination. We encourage all Belarusians to consider themselves journalists; everyone should film, record and publish. We urge everyone to support journalists and bloggers with funding, resources and information. We collaborate to identify fake news, planted stories and propaganda.

Fourth, we will persist in exerting pressure on the institutions of the state. We advise minimal collaboration, and so far we have had great success in doing so. Pro-government trade unions and state-run youth organizations have been losing members at a rapid rate. We will continue to ignore pro-government rallies and to persuade others to resist pressure to participate.

Fifth, we are committed to justice and human rights. Since the current, pro-Lukashenko judiciary refuses to abide by the rule of law, we need to preserve evidence for the future. We record and film crimes and abuse by the police and other members of the armed forces. We share that evidence with human rights organizations and the mass media. We encourage international organizations to help us in investigating these crimes. We congratulate last week’s decision by the Parliamentary Assembly of the Council of Europe to initiate a special investigative body devoted to the crimes and human rights abuses in Belarus.

Sixth, we must continue to seek support from the international community. We ask our supporters abroad to lobby their politicians and to share information about Belarus with friends, neighbors and relatives.

We ask other governments to stop collaborating with the regime and impose sanctions on individuals who forged the results of the election and committed crimes against their own citizens. We warn that all the agreements made with the current illegal regime in Belarus are made by other countries at their own risk, and we cannot guarantee that the future legally and freely elected government will uphold such agreements. We also encourage other countries to do everything they can to help Belarusians who were forced to escape the country in the last crackdown.

Contrary to what state propaganda claims, time is on our side. This regime is a giant with feet of clay. What appeared to be destined for eternity will be gone in a blink of an eye. All we have to do is stick together. There is no question of whether we will win. We have won already. The regime is attempting to steal that victory from us. It will not succeed.