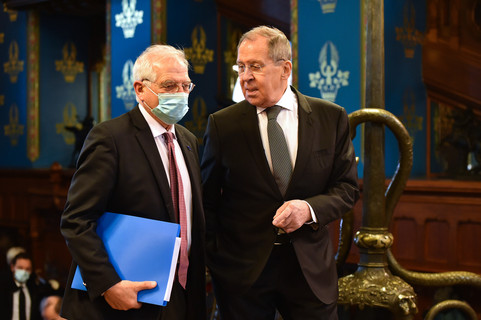 The Lithuanian government was also drafting a bill to bar other companies that posed a security risk from contracts in the transportation, energy, and telecommunications sectors in future.

Nuctech was deemed a "threat to national security" by Lithuania’s intelligence services and cyber-defence forces.

"The decision to ban Nuctech is a step towards our strategic goal – freedom from unreliable technology suppliers and elimination of possible security risks before the damage is done," he said.

The move is likely to sharpen EU debate on ties with China.

The EU recently signed an investment treaty with Beijing despite concern China was buying strategic assets in Europe in a sinister way.

The US has also urged the EU to treat China with caution, given its aggressive naval posturing in the Pacific and its horrific human rights record.

And the pro-US Baltic countries are emerging as an EU spear-tip in the confrontation.

For its part, Estonian intelligence also warned that Europe’s new trade and investment darling was trying to undermine it.

"The Chinese leadership understands that a united West is an insurmountable obstacle for China that must be broken," Estonia’s foreign intelligence service, the Välisluureamet, said in its 2021 report out on Wednesday.

"China understands very well that a fragmented Europe is a weak adversary," it said.

"China does not use disinformation as actively and as professionally as Russia, but it is likely that it will expand and intensify its activities in this area in the near future. China’s influence operations aim to weaken Europe’s open society," the report said.

China also operated "cells" in the EU, including Estonia, which harassed Chinese expats with "ideological manipulation", the report added.

And Beijing was in talks to take part in large-scale military drills with Russia and Belarus, called Zapad 21, later this year.

"If China confirms its participation … it will be intriguing to see how the Chinese armed forces define their role in a [simulated] military operation against Nato in Europe," the Välisluureamet said.

Meanwhile, the EU would probably have to live with the current regimes in Russia and Belarus for years despite recent anti-government protests and economic stagnation there.

Russian president Vladimir Putin’s plan to stay in power could only be thwarted by "a sudden serious health issue or growing popular opposition beyond a critical level", the Estonian report said.

Putin had sent "Russian security operatives … on the ground" to Belarus "to curb the protests and disrupt their organisation", it noted.

"Russia wants to avoid [Belarus president Alexander] Lukashenko being ousted by protesters at all costs, which could encourage people in Russia to follow suit", the report said.

The past year saw Russia try to increase its military presence in Belarus and Libya, as well as Algeria and Egypt, via arms sales.

Estonia, which is on Nato’s front-line, is among a handful of EU countries which spend serious money on intelligence.

It has more than three times the number of counter-intelligence officers specialising in Russia compared to Belgium, for instance.

The Välisluureamet also predicted that "2021 will again see Russian influence operations designed to create and deepen divides within and between Western societies, including at the EU level".

It said Russia’s ‘GRU’ military intelligence service had a specialised unit, codenamed "54777", that dealt with "psychological warfare" against EU targets.

GRU officers worked under cover in Europe to establish contacts.

In one example, revealed for the first time in Wednesday’s report, the 54777’s commander, Alexander Shchedrin, using the title of deputy director of the Institute of the Russian Diaspora, an NGO that was a "GRU front", organised a conference in Athens in October 2014, in which speakers attacked EU sanctions on Russia over its annexation of Crimea from Ukraine.

"This case shows how easy it was for the GRU to present its messages to receptive Western audiences and establish high-level contacts," Estonian intelligence said.

The 54777 unit also "controlled English-language online portals, such as inforos.ru, infobrics.org and oneworld.press, [which] disseminated false information about the Covid-19 pandemic, undermining Western countries’ efforts to curb the spread of the virus", the report said.